If you missed part one, go here.

Wow. If you read the last line of PSA Part 1,  you probably believed me when I said the next installment of the series would be out in a couple of days. Well, a couple of days has become about 3 weeks. Sorry about that, but a vacation came riding in there and disrupted my life for awhile. Vacations have a way of doing that. One week to get ready, one week away, and one week to recover. I consider myself still in the recovery stage, trying to wrap my mind and my body around slinging boards at the factory again. One of the more nasty side effects of hormone therapy is that my muscles continue to atrophy, so a week off from lifting and twisting and walking made me feel awesome. Unfortunately, going back to work this week has been a painful experience, so this blog is being written at the end of the week, trying to recover from lifting, twisting and walking. So, anyhoo, let’s get started. But first, ladies and gentleman, the Atlantic Ocean!!  I love the ocean. 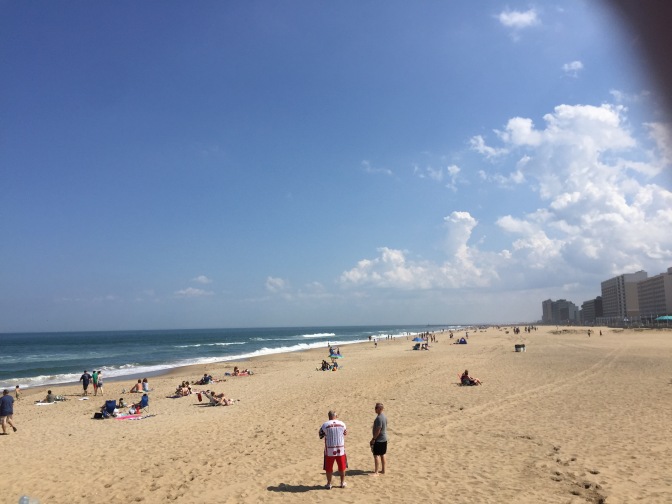 So, when we last left our hero,(me), he was contemplating life as he currently knew it. The question of the day, and, I think, the question of every cancer survivor at initial diagnosis is this: Am I going to die?  Not to be too dramatic about this, but I think almost everyone has in their head the classic movie scene where the patient is sitting in the doctors office, looking worried, hanging on desperately to his spouses hand, getting the diagnosis and then asking,

Patient-(sitting at the edge of the chair, looking at the doctor with a plaintive look, practically pleading for some kind of news). “Doc…how long have I got?”

Doctor-(looking at a chart with reading glasses on, slowly looking over the glasses). “Six months.”

Ok, that’s all well and good for Hollywood, but it didn’t work that way for me. Basically, after being diagnosed, it was time to drink some barium, and some other crap, lay down on a table and get some scans done. I’ve done this three times now, so it doesn’t seem like that big a deal, but at the time, I was very scared. First off, you walk into a section of the hospital that is labeled, “Nuclear medicine.”  That was enough to throw things a little sideways for me right off the bat.  It was another one of those holy shit moments that said to me,”Hang on, Dan, this ride is going to get a little bumpy.”

The CT scan was relatively uneventful, except that the stuff that was in the I.V. made me pretty nauseous. There is nothing like a disembodied voice telling you to hold your breath in 3,2,1 and you think you are going to throw up. Good times!

The bone scan, however, was all kinds of eventful. Not only did the technician go to the same elementary school that I did, and somehow she remembered me, but she also had a really nice conversation with Holly while the machine was scanning my bones. It was all fun and games until the technician got a worried look on her face and said she wanted to scan me again. Another, “wait…what?”moment. After another scan, we could tell that there was clearly something wrong, although the tech couldn’t tell us about it, because the doctor needed to look at it.

(A quick veer here. X-ray, CT, bone scan, and MRI techs all look at the pictures they take for hours on end. My guess is that they have a a pretty good idea what they are looking at. But the docs all went to medical school and are making the big bucks, so they have to defer to them. Which is kind of ridiculous if you think about it. Who better to read an X-ray than the person taking them all day?  Ok, back to the blog.)

So, the next day, my urologist, my friend Jon, calls me to tell me there is a “shadow” on my spine. The bone scan doc isn’t sure what it is, so he schedules me for an MRI to get a closer look. I ask Jon what he thinks it is. He tells me, “Could be cancer, or it could just be arthritis.”  Wait…what??  That seemed like a big gap in seriousness to me. It was like it was the difference between “Yep, you’re going to die,” to “Take a couple of Advil.”

This picture is an example of both an MRI machine and a CT scanner. I think it is from an ad to a hospital trying to decide which machine to buy. My guess is they are both pretty expensive.

I learned something about MRI machines that day. Apparently they are very popular, so even though I thought my case was way more important than anyone else’s, I had to wait 5 days before I could get in one. Oh boy. More waiting. And this was worse. My brain started telling my body that I had some sort of rare spinal cancer, so I started to feel like every ache and pain in my back was surefire proof that I was a goner. I actually had dreams where I was laying in bed unable to sit up because the cancer had eaten a big hole in my backbone. Sheesh.  The mind can play some evil tricks on you when the stress levels start to crank up.

Another side effect of the popularity of MRI machines is that they schedule appointments for weird times of the day.  My appointment was for 8:45 on a Thursday night. Since I was working 2nd shift, and I was close to the clinic with the machine, I decided just to swing over there during an extended lunch break. No biggie, right?  Wrong. This was the first time since my diagnosis that I didn’t have Holly by my side. As I sat there getting ready to get in the tube, the enormity of the situation I was in started to hit me, and I felt utterly alone. In a little over 3 weeks, I went from a normal, (well, relatively normal) healthy 48 year old male, to a person with a cancer that could possibly be serious enough that I might have to fight it with surgery, radiation, chemo, and all the fun side effects that come with it. My eyes started to fill with tears as I climbed up on the table. The tech noticed, so she put her hand on my shoulder and told me everything was going to be alright.  I wasn’t convinced.

Now, I am not the bravest person when it comes to getting into small, confining spaces, but for some reason, as the table slid me into the machine that was going to be very important in determining the immediate future of my life, a calmness came over me. It probably had something to do with the fact that I was praying none stop.

I will get into my on again, off again relationship with God, and the results of all my tests, in my next blog, PSA and Me, Part 3.

Until then, thanks for reading.