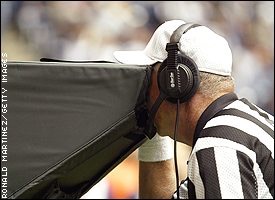 If you read the title of this blog and thought, what the heck does something said during an NFL football game have to do with prostate cancer, well, trust me, all this will be explained. I haven’t written about sports at all lately, and frankly, after watching a good chunk of the NFL draft over the weekend, I’m kind of missing football. I love a nice cool, fall weekend with some great football games on both Saturday and Sunday. But, when you start looking forward to football season, you kind of wish away summer, which is something you never want to do in the state of Michigan.  Summer is a time of year to be treasured in this state, seeing how it is so short. I think people that live in Michigan that buy pools and boats are incredibly optimistic people, and that’s how we view summer here…optimistically. We take advantage of the warm weather whenever we can. Everybody in the pool!!!  I’ll leave my shirt on, thank you, because of my fat gills, as we all attempt to roll back some evolution.

In case you were wondering, this is part 3 of PSA and Me, (you can find part 1 here, part 2 here), but as you can probably tell by the first paragraph of this blog, I’m starting to get kinda bored with this series. I feel it is important to follow through, however, because I’m attempting to tell my story of how I was diagnosed and treated for prostate cancer. So, this being part 3, I’m gonna try to keep this thing a trilogy, like the Lord of the Rings, or Star Wars. (It is my contention that none of the other Star Wars movies, like the ones with JarJar Binks, Sith Lords and clones, EVER HAPPENED. DO YOU HEAR ME?! THEY NEVER HAPPENED!!)  Whew. Sorry.

Getting back to the story, after getting the MRI, I had to wait a couple more excruciating days before getting the results. If there is one thing about this whole series (trilogy?) that I want you muggles without cancer to understand is how much the waiting for results phase of cancer really sucks. Especially for someone like me, who, and if you’ve read any of my blogs you should know this, has a tendency to be a person who sees the glass half empty. (What? No! you say). I’m not pessimistic, I’m optimistically challenged. My brain can take a party full of drunk dolphins twirling bottles of tequila on their noses and and think,”Well, there goes the margaritas, I’ll guess I’ll have a beer” instead of “Holy shit, how cool is this party!  Pass the tequila, Flipper!” It’s just kind of the way I’m wired. So when I have a moment to think about any test I take for cancer, during the waiting phase my take is usually whatever is the worst possible scenario. Nice, eh? 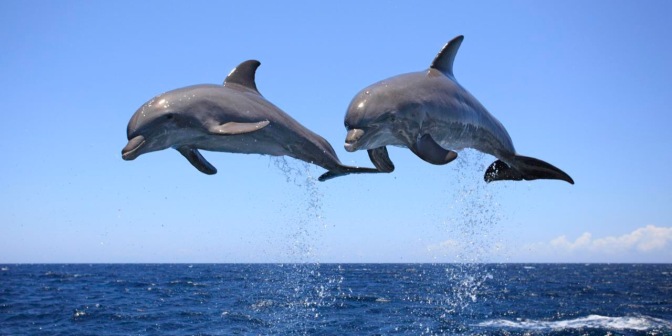 Dolphins, without the tequila bottles. It still looks like they are having fun.

But, here’s the good news. All my tests, CT scans, bone scans, and MRI came back negative for cancer. Thank God for all those good results. I still had a decision to make as far as treatment was concerned, but at least nothing had metastasized. Which made things a lot easier.

(A quick veer here. As far as the God thing is concerned, I have a tendency to look for God when I am in a life and death struggle. Kind of like the old saying that there are no atheists in fox holes.  I am not an atheist and I believe Jesus is my Lord and Savior, but my faith can get a little shaky at times. I get really close to God when I’m desperate. I realize this is not the correct way to have a relationship with Him, but that’s how I roll.  The whole God thing is something I need to talk about in a future blog, but if you want to know some of my history, I talk about it in the blog titled The New Fire and Brimstone.  Actually, I talk about in other blogs, too. With my upbringing in Western Michigan, it hard not to talk about the religious aspects of all this stuff. So, hey, read them all.)

One of the big problems with prostate cancer is that there is no one best way to treat it, which means when you are diagnosed you get a myriad of choices on what to do. One of the choices is to do nothing. Because prostate cancer grows slowly, and the side effects of treatment are pretty severe, if it has been determined that if your particular brand of cancer isn’t that aggressive, you get to participate in something that used to be called “watchful waiting.”  I say it used to be called that because they have changed the terminology to “active surveillance.”  I think they changed it so your cancer treatment sounds like you are actually doing something. “Watchful waiting” sounds like you are sitting on a bench, looking down an empty road, waiting for the next bus.  “Active surveillance ” sounds more like you are crouched behind some fortifications with binoculars, monitoring your enemies movements so if they try anything, you can call in a mortar strike or air support. And that sounds way cooler than waiting for a bus.

Because of my age and the aggressiveness of my cancer, “active surveillance” was not considered an option, so surgery was recommended. My team and I decided on a radical prostatectomy, which is a fancy way of saying that my prostate would be removed from my body. The method for that removal would be robotic surgery, performed by a surgeon using the latest technology at that time, the DaVinci Robot. The DaVinci robot is actually named after Leonardo da Vinci, but not because they can get the thing to paint the Mona Lisa, but because of his work in human anatomy.

This is where the name of this post came from. Look at the above picture. To me it looks like what NFL referees look into when they are trying to determine the outcome of a play through instant replay. I half expected my doc to come out of that thing and announce,”The video of the play is inconclusive. The call on the field stands.”  Or my favorite,”The receiver did not complete the process of the catch, so the pass is ruled incomplete.”  As a Lions fan, that one has beat us a time or two. But, apparently, he knew what he was doing under the hood of that thing, because the surgery went well, and, after two weeks of hell with a catheter and about 4 weeks of leaking issues, I started to resume my life again. A PSA test was taken at 6 weeks, and and came back undetectable, which, considering my initial numbers, surprised everyone. I was cured!  The cancer was out of my body! Little did I know how far that was from the truth. But because I’m already in violation of the One Poop Rule, that’s another story for another time.

And if there is a part 4, 5, or 6, I promise not to have Sith Lords or clones in it. And for goodness sake certainly no mention of JarJar Binks.

Normally that would be the end of the blog, but I want to give a quick shout out to one of my e-mail followers, Dennis Bonn. Denny  is one of my brothers best friends, and just had heart surgery. If you could keep him in your prayers, it would be much appreciated. Get well soon, Dennis!

One thought on “The Call on the Field Stands. ”