Over the past 20 years as a bike rider, I was privileged to participate in three different large group riding events known as RAGBRAI. For you that aren’t familiar with this event, let me bring you up to speed.

Rolling through the Hawkeye State.

First off, the name. RAGBRAI stands for the Register’s Annual Great Bike Ride Across Iowa. It is an event that is always held over the last full week of July. It is a seven day event that has approximately 15,000 riders participating. You basically ride your bike from town to town, starting at the Missouri River to the west and ending at the Mississippi River to the east. Everyday there’s a route that you follow that takes you across the state, which can vary from as little as 50 miles, to over 80 miles a day.

If you’re thinking to yourself right now, wow, Dan, that sounds kinda boring, hang on. The trip across the state, through mind numbing mile after mile of cornfields, is made way more interesting by the people and the places you see. RAGBRAI is a party. I like to call it a seven day Mardi Gras on wheels. In every small town you travel through, people are REALLY happy to see you. They sell everything in these towns. From burgers and waffles (the waffle guy travels with the entire bunch from town to town. They’re the best waffles I’ve ever had) to selling drinks like Gatorade and a prodigious amount of beer.

The overnight towns always have a beer tent and bands, and the party sometimes goes on until late at night. I have been caught up in some of those late night beer tent parties, and I’m here to tell you, getting back on that bike seat at 8 am the next day is a bit of a challenge. It’s also a challenge to ride the last 20 miles of a day when you stop in a small town bar to knock back a couple (or 5) ice cold beers on a hot Iowa afternoon. Hydration is important when participating in a world class athletic endeavor. 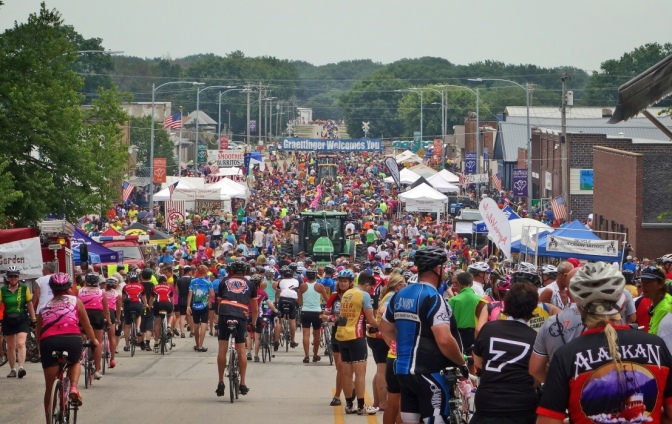 Time for a cold one.

(A quick word about Iowa. It is not flat. Iowa has many rolling hills and some absolute leg crushers. Also, even though you cross the state from west to east, the wind does not always come out of the west. Your friends tell you it’s mostly flat and the winds come out of the west when they are trying to talk you into riding. You start cussing at these same friends when you’re climbing a mile long hill away from the Cedar River with the wind straight into your face.)

The people are amazingly friendly, and the towns you travel through are straight Americana. Most have beautiful town squares with amazing old courthouses. And everybody is happy and having a great time.

Team Larry, after the days ride,with our hostess for that day. We camped in back yards all across Iowa.

I thought about RAGBRAI yesterday while I was self isolating in my house, waiting for this dreaded virus to pass over us, to go away and let us get back to a normal life. I wondered if RAGBRAI would happen at all this year. The little towns on the route count on the revenue from the ride. It would be a shame if they would lose that money. And there are a lot of other events that are in danger of getting cancelled. Major League Baseball, the end of the NBA season, college and pro football, you name it, any event that draws a crowd has to be in jeopardy this year. A lot of money lost.

But, way more important than the money, will be the loss of community. If you’ve ever sat in a college football stadium, and naturally rose up with the crowd as the quarterback starts to throw a pass, you know what I mean. If they decide to hold the games without crowds, it would be better than nothing, but not much. It wouldn’t be the same.

Go Blue, with Jeff and Travis.

Right now we have to stay away from each other. I get that. I have talked to my family with group text messages and FaceTime calls and regular phone calls. It’s great to hear their voices and see their faces. But it’s not the same. I can’t touch them. My boys and my daughter in law are all world class huggers, and even though I’m usually not much of a hugger, right now I could really use one.

Easter was rough. Every year at our old church we sing the Hallelujah Chorus from Handel’s Messiah at the end of Easter service. People are invited from the congregation to come up and sing with the choir, and I always go up and position myself between the tenors and the basses because I can sing both. It’s awesome. It never ceases to bring goosebumps to my arms and tears to my eyes.

We can watch church on TV or on the computer. We can watch old games on YouTube or on network tv. We can talk to our families on FaceTime or whatever the latest internet group meeting thingie there is now. We can even go for a bike ride, alone, self distancing from others. But doing all that stuff by yourself, without some kind of human touch, is simply not the same. It would be like riding a bike across Iowa alone, without the beer tents, without the waffle guy, without your friends to get you over that next hill. It would just be a lot of lonely cornfields.

Team Larry, at the end of the ride. Definitely not social distancing.

I’m not a scientist or a politician, and I’m not going to try to predict what’s gonna happen over the next weeks and months. Our lives have all been changed. But I do know this. It can’t continue forever. There has to be an end. We may stay safe, and we may still be alive, but without a human touch, life really isn’t worth living. We are in this thing together. And I need a hug.

A mid 50s cancer survivor with a lot to say. View all posts by Dan Cole